Around 7 years ago, I actively decided that I wouldn’t compose anymore, and started focusing on the study of computation. For a person that just had majored in music composition, this looked like an abrupt change, and people often ask me what made me take that decision. Truth is, for me it didn’t look drastic at all, but the most logical step.

Apart from reviving some fond memories from the past, in this post I will try to substantiate that claim and bring up some interesting facts. I hope you enjoy it!

Me, Freiburg and Ligeti

Ever since I can remember, music has been my true passion. It became my profession and my hobby, and my life was all about it: playing in multiple bands and orchestras, meeting with musician friends, going to concerts and talking about music… for the best part of my life, it was music all over the place. Even at parties! Here is a fun one, with the one and only Charanga OT: 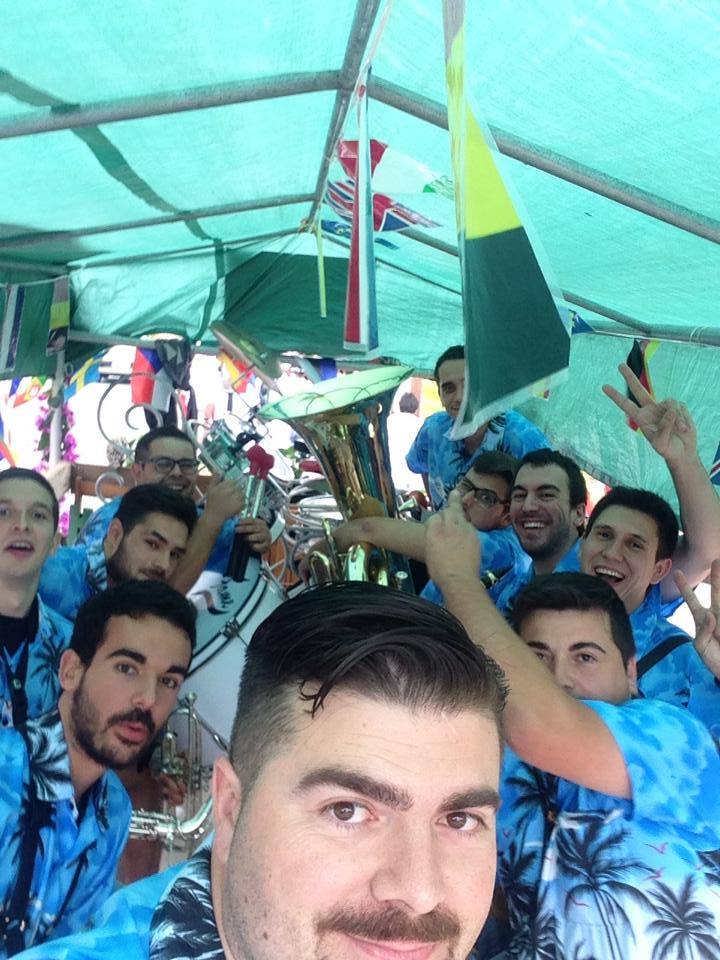 Fast forwarding to the final years of my composition studies: In order to finish my composition degree, my idea was to write (and possibly play) a piano concerto, and to that end I had spent quite some time analyzing related pieces from other composers, from the classics all the way up to the 20$^{th}$ century. I wanted to do something sharp and contrastive, making use of metric modulations, polyharmonies and extended techniques that would have made Hanslick super proud. Even if this was totally within the boundaries of modernism, I was candid enough to believe it was something very original.

At the same time, I got pretty interested in the idea of algorithmic composition and electronic music. So much in fact, that I moved to Germany to study composition with Orm Finnendahl at the HfM Freiburg. Apart from the technical and compositional aspects, from Orm I also learned to be accurate with my perceptions, consequent with my decisions, and to look for (and reflect) the raw essence of things, no matter how difficult or polemic that may be.

This new perspective, that I still respect and admire, was in stark contrast with the rather streamlined approach of analysis-and-technique I was settled in, and pushed me to take a new look at everything, including myself. Furthermore, as part of my optional coursework in Freiburg, I participated in a seminar about Ligeti, where I discovered that he had composed a piano concerto:

When I first heard it, I was astonished: this was what I was trying to do, but a million times better! Ligeti completely nailed whatever ideas I had been tinkering with, so I decided to completely scrub my piano concerto, and focus on something else instead. It was very humbling, but really a positive feeling: I felt happy that such a wonderful piece existed. To this date, this is still my favourite “classical” composition.

Back then I was probably confused, or maybe even bamboozled, but looking back, I can see how all these new ideas and stimuli compounded: Ligeti gave me a sense of closure with my “old ways”, and allowed me to focus on all the stimulating new stuff that Orm and Germany were sending my way.

But the vital lessons that Ligeti was imparting didn’t stop there: fueled by curiosity (and as a part of mandatory coursework), I wanted to know more about his life and work. I went to the library and grabbed a couple monographies. I started building a timeline (see image below), and then I encountered a suspicious gap between 1978 and 1982 in which no compositions could be found. This was a contrast with his usual productivity since the late 40s.

I tried to fill the gap with other sources, but as it turned out, Ligeti did in fact not compose anything in those years because he had faced a creative crisis. Even more: The piano concerto, as well as other pieces that happened to be among my favorite ones, came after the crisis.

Before, I used to regard “having to change things” as a sign of compromise and weakness: If things are perfect, you don’t change anything. But now, I had a compelling example that changing things can be also a sign of strength, and lead to the best outcome.

So now I really had to know what happened during that crisis, that led to my favourite composition! Don’t get me wrong, the 60s and 70s Ligeti is extremely good, but I was very fond of the Concerto. I gathered anything I could find on the matter into an essay that I translated to German with the help of many good friends at the HfM (links for the Spanish and German-incomplete versions below). 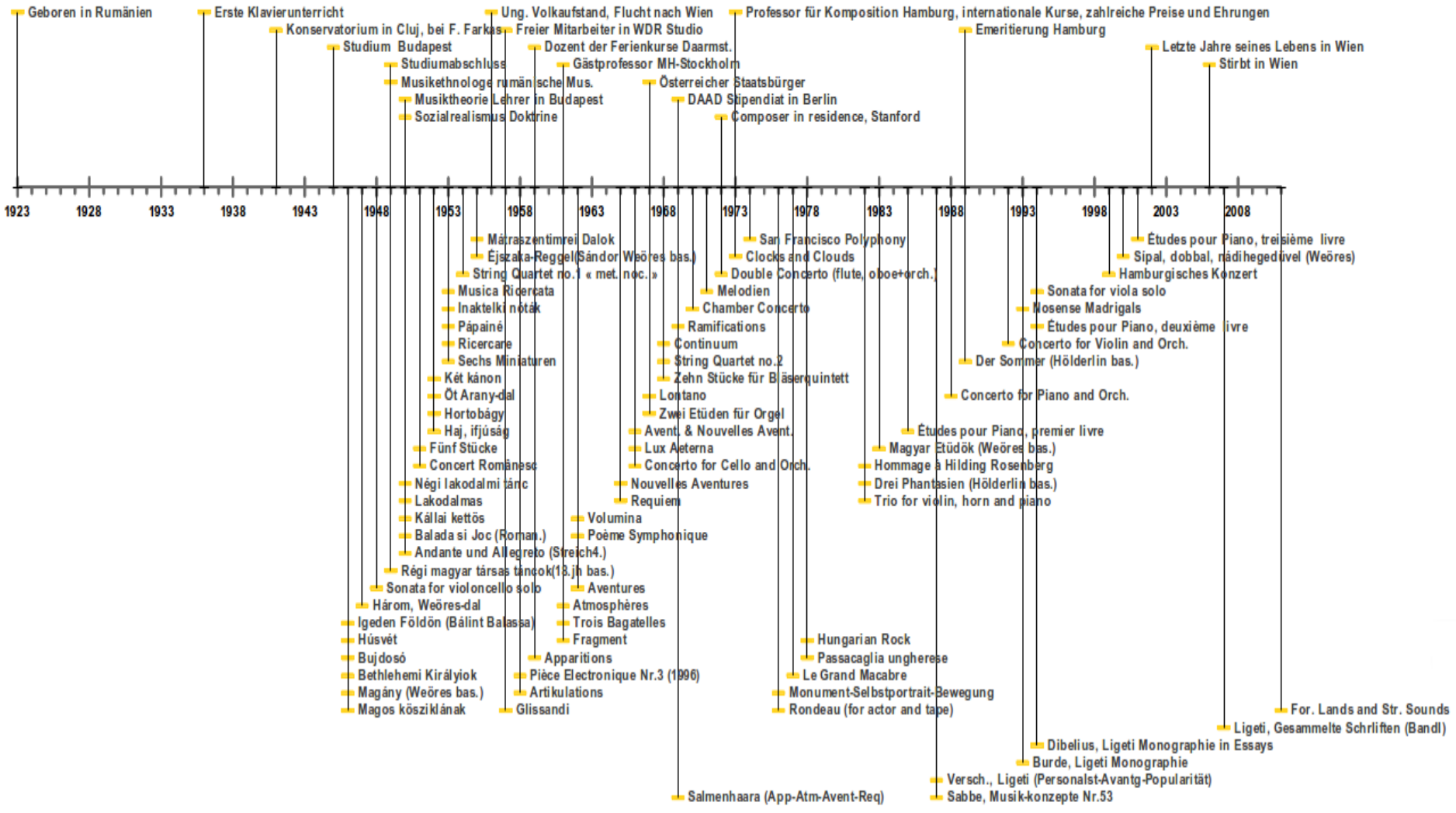 Timeline of Ligeti’s life and work, from my essay (download link below)

Reading on the topic allowed me to know better the person behind the compositions:

And also gave me a much better picture of his legitimate reasons for wanting to stop and reinvent himself, and the means of doing so by pursuing his curiosities and things that he considered fun. This was the final push I needed to understand that music goes beyond form and content, is a cultural artifact by us and for us, and this helped me cementing the idea that I needed to understand myself and my environment better, before being able to compose things that I’d consider meaningful. Even if I didn’t “produce” much in that year, I still consider it one of the most productive years of my life.

Crisis and Productivity, essay on Ligeti

As a result of my soul-searching, I understood that the (let’s call it Beethovenian) model of creative genius that has everything under control (which seems to be pretty extended in the educative system) didn’t quite fit me; suddenly so many things made sense. I explored and learned about alternatives like collaborative creation, happenings and concept art, and I resolved that the path I was following with algorithmic art was the most compelling one, for several reasons:

But I soon realized after a few modest attempts that I would need proper technical education in order to have artistic freedom, exactly like any other musician needs to practice their instrument.

So I studied computer science, and after that I focused on machine learning, since nowadays it is the most effective way we have to teach complex behaviour to computers. I also collaborated with researchers from the empirical aesthetics, as they have the tools to explore and understand how humans perceive, feel and value different stimuli, including art.

This has taken quite a few years so far (and counting), and at this pace it may still take some time more to concert these two worlds, but what we can learn from Ligeti is that as long as it makes sense and you have fun, that shouldn’t be an issue at all! 🎹 🎯