In this 2014 work made with PureData/GEM you can see that I was actively looking for alternative ways of producing the music other than composing it myself: Tamagotchi is a videogame-like sound installation, designed to be projected in a dark room with 4 loudspeakers at the corners, and to be played by a single person using a console controller.

Influenced by Johannes Kreidler’s RAM Microsystems, and his writings on it, where he cites Lachenmann with his “Composing means building an instrument”, I was very interested in the balance between proactiveness and reactiveness in electronic music production. Do we press a button to generate hundreds and thousands of sonatas, or do we have a highly responsive joystick like in Kreidler’s performance?

Tamagotchi is somewhat inbetween. Apart from the menu music (Mozart’s 7 variations on Wilhelm Von nassau, played by the pianist Ingrid Haebler), which I considered more fitting than anything I would make myself, the sound is generated by two agents that nobody can directly control: the rain, which happens cyclically at random intervals, and the Tamagotchi, which interacts with the user under specific conditions.

In the quadraphonic setup, the 4 corners represent the 4 loudspeakers, and as the Tamagotchi roams through the space, the sounds also move through the room (the “stereo” version uploaded here collapses them into left and right, but it is still possible to track the movement of the Tamagotchi). The Tamagotchi also has a state that affects the quality of the sound. By engaging the Tamagotchi, the user can “play catch” with it, making it happier. The user can also lure it with food:

So you can see that the user has some degree of impact in the outcome, but an essential part of it will also be sounds that can’t be controlled. A lesson learned from John Cage, maybe? Like many of his pieces, it also has this low-key tone to it that today would even make it pass for legit ASMR content 😁

You can download the project (without the Mozart, which has to be retrieved from an authorized source), by clicking here (320kB). The PD audio patch looks like this: 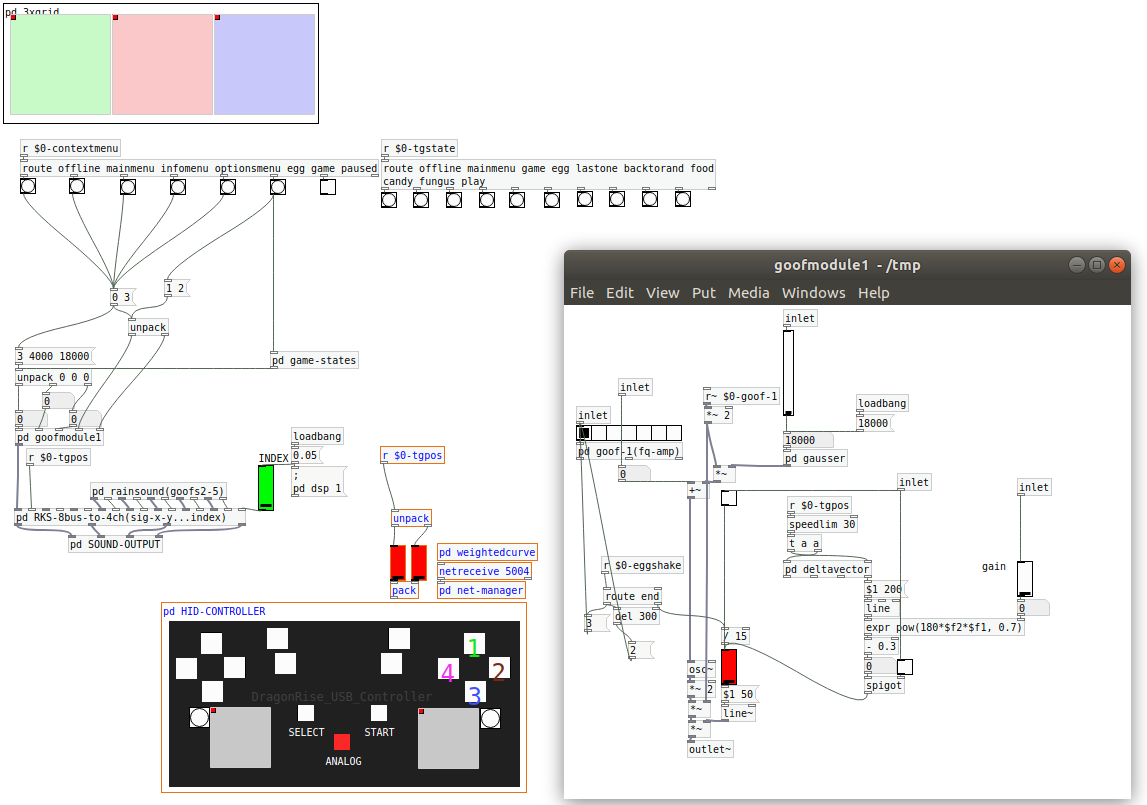 The media and PD patches in this post are licensed under CC BY-NC-ND 4.0. Feel free to contact me if you want any more details or you are planning to use it!